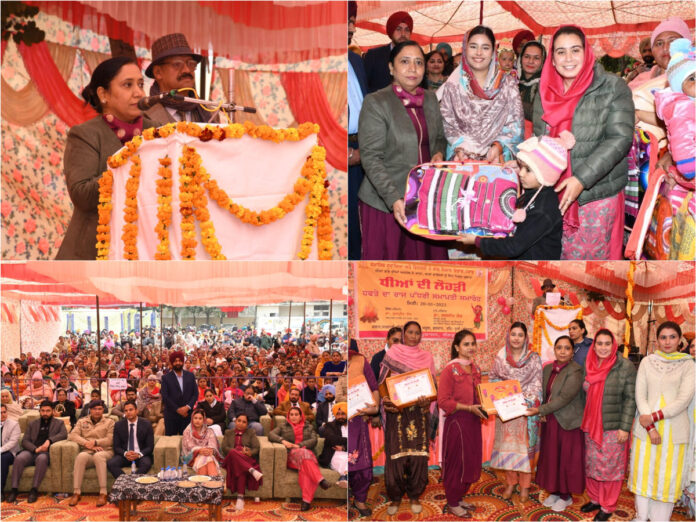 – During state-level closing ceremony, Cabinet Minister Dr. Baljit Kaur, Dr. Gurpreet Kaur, MLA Narinder Kaur Bharaj and other personalities celebrates Lohri with families of newborn girls
– Punjab government standing firm to protect rights of women: Dr. Baljit Kaur
Bhalwan/Sangrur, (Daljeet Kaur)- The Punjab government led by Chief Minister Bhagwant Mann organized a state-level concluding ceremony of ‘Dhiyan di Lohri’ week today here at village Bhalwan in Sangrur district. In this program, Punjab Social Security, Women and Child Development Minister Dr. Baljit Kaur, wife of Chief Minister Bhagwant Mann Dr. Gurpreet Kaur and MLA Sangrur Narinder Kaur Bharaj felicitated newborn and other girls who excelled in the field of education and sports. Speaking on this occasion, Cabinet Minister Dr. Baljit Kaur said that the daughters of Punjab were emerging as leaders in every field and the state government under the leadership of Chief Minister Bhagwant Mann was standing firm to protect the rights of women.
Cabinet Minister Dr. Baljit Kaur said that as per the vision of Chief Minister Bhagwant Mann, concrete efforts were being made to boost the morale of the daughters of Punjab in every field and these efforts have been started by celebrating ‘Dhiyan di Lohri’. She said that due to the negligence of the previous governments, the sex ratio rate in the state was very low and efforts were being made seriously to raise it. She said that the society does not celebrate the birth of female children and to change this malpractice, Punjab government has decided to celebrate ‘Dhiyan di Lohri’. She said that since centuries, women have made their unique contribution in the progress of the society and have proved their mettle in every field.
Dr. Baljit Kaur said that it was a matter of great concern for a state with a glorious history that tragic incidents like feticide took place here and the Punjab government has now taken the noble initiative to celebrate ‘Dhiyan di Lohri’ week. She said that now onwards, not only the birth of daughters but every stage of life would be celebrated by the state government.
On this occasion, MLA from Sangrur Narinder Kaur Bharaj congratulate Chief Minister Bhagwant Mann for taking such a big initiative for daughters and said that if the girls get an open and constructive environment at home, then they can hone their skills in every field.
During the event, the team of Lok Kala Manch Zira staged a play with a message to stop female feticide. Apart from this, the girl students of Adarsh School presented a cultural program. On this occasion, parents of 51 new born daughters were honored with certificates and special kits by the key personalities and women of 11 self help groups and 20 meritorious female students were also honored.
On this occasion Deputy Commissioner Jitendra Jorwal, SSP Surendra Lamba, Chief Minister’s OSD Onkar Singh, Chairman District Planning Committee Gurmail Singh Gharachon, Chairman Gau Sewa Commission Ashok Kumar Singla, Additional Deputy Commissioner Varjit Walia, Assistant Commissioner (UT) Nitesh Jain, SDM Dhuri Amit Gupta, District Program Officer Gagandeep Singh, District Social Security Officer Loveleen Kaur, District Child Protection Officer Navneet Kaur, District Education Officer Sanjeev Kumar and a large number of other dignitaries and local residents were present.
Share
Facebook
Twitter
Pinterest
WhatsApp
Previous articleNOT ONLY NEWLY ELECTED MAYOR & DEPUTY MAYORS  BUT ALL 35 ELECTED COUNCILLORS OF M.C. CHANDIGARH ARE TECHNICALLY PARTY-LESS — ADVOCATE
Next articleOwners of Mobile Phlebotomy Company Plead Guilty to $ 7 Million Medicare Fraud