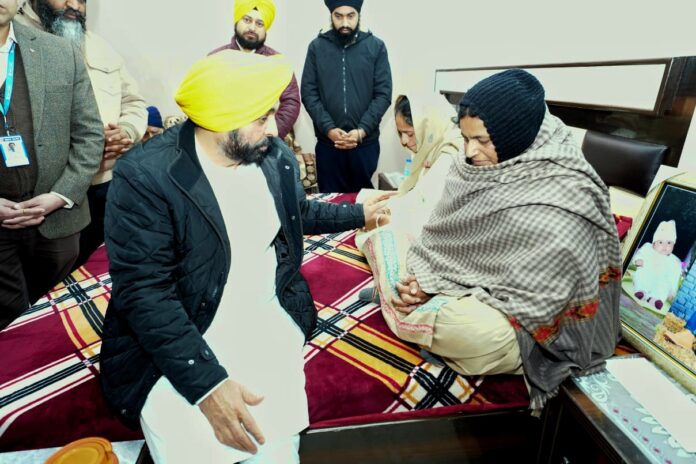 Shahpur (Gurdaspur) : Punjab Chief Minister Bhagwant Mann on Wednesday announced to construct a stadium and name a road after martyr constable Kuldeep Singh Bajwa of Punjab Police, who sacrificed his life at the altar of the motherland while combating the anti-social elements.

The Chief Minister, who visited the house of the martyr here at his native village, handed over a cheques worth Rs 2 crore, including Rs 1 crore ex gratia by state government and Rs 1 crore of life insurance by HDFC bank, to the distressed family as a mark of respect for his supreme sacrifice for the country. He said that the martyr Constable Kuldeep Bajwa had attained martyrdom while performing his duty at Phagwara.  Bhagwant Mann said that this humble initiative of the state government is in recognition of the immense contribution of this son of soil towards maintaining law and order in the state. 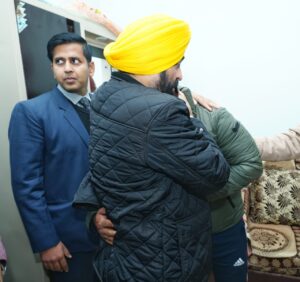 Reiterating the firm commitment of the state government to help the families of the soldiers who sacrifice their life at the altar of the motherland, the Chief Minister said that it is the bounden duty of the Punjab government. He announced the construction of a stadium in the village in the name of martyr Kuldeep Singh Bajwa with an ultra modern athletic track. Bhagwant Mann expressed hope that the youth of the region will judiciously use this stadium for training themselves to join the Punjab Police and Armed Forces.

The Chief Minister also announced to name the road leading to the village of martyr, in the name of Kuldeep Singh Bajwa. He said that this initiative is in recognition of the immense contribution of the brave heart who has sacrificed his life for the sake of the country. Bhagwant Mann said that financial assistance to family of martyr Kuldeep Singh is in consonance with the commitment of the state government to ensure the well being of the soldiers and their families.

The Chief Minister expressed hope that this healing touch of the state will go a long way in helping the aggrieved family on one hand and securing their future on the other. Likewise, he envisioned that it will also encourage the youth to join the Armed forces and Punjab Police to serve their motherland. Bhagwant Mann described the residents of border areas as ‘true patriots’, who have made immense contributions to safeguard the unity, integrity and sovereignty of the country.

The Chief Minister said that this region had produced a number of soldiers and generals of the Armed forces who have made supreme sacrifices for the country.  Bhagwant Mann said that they have braved every odd for the sake of preserving the unity and integrity of the country. He said that the immense contribution of these ‘brave hearts’ residing in the border belt of the state is a source of inspiration for many.