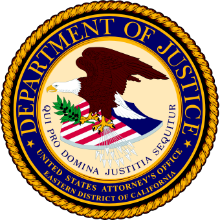 SACRAMENTO  — A federal grand jury returned a 12-count superseding indictment on Thursday, adding Andre Warren Jr., 24, of Sacramento; Jjuan Brown, 32, of San Francisco; Kenyatta Alexander, 37, of Sacramento; Jarren Meek, 24, of Stockton; and Keino Brue, 28, of Georgia, as defendants, and charging them with conspiracy to unlawfully deal in firearms without a license, and unlawfully dealing in firearms without a license, United States Attorney Phillip A. Talbert announced. Alexander is also charged with three counts of being a felon in possession of a firearm.

According to court documents, on March 24, 2022, Jerrell Lawson, 32, of Sacramento; Aisha Hoggatt, 30, of Sacramento; Terrence Phillips, 40, of Union City; James Gordley, 33, of Modesto; and Malek Williams, 29, of Georgia, were indicted for a firearms trafficking scheme where firearms were acquired in Georgia and shipped to California to sell on the black market.

Between November 2019 and October 2021, the Lawson and his co-conspirators brought more than 500 firearms from Georgia into California and sent more than $300,000 in money transfers to purchase those firearms. Lawson would broker firearms transactions in Georgia over the internet, and Williams, a Georgia resident with a license to carry a concealed firearm, would pick up firearms in person and mail the firearms to various locations in California at Lawson’s direction. Some of the firearms went to individuals who are prohibited from possessing firearms due to prior felony convictions. Hoggatt worked with Lawson to coordinate the purchase, mailing, and distribution of the firearms. Phillips and Gordley also distributed the firearms in California.

Additional investigation has revealed that Warren Jr., Alexander, Brown, and Meek are members of the Lawson’s firearms trafficking organization and sub-distributors of firearms. Bruce also conducted hand-to-hand firearms transactions and received over $23,000 in money transfers to purchase firearms for Lawson’s firearms trafficking organization.  Warren Jr., Alexander, Brown, and Meek discussed acquiring and selling firearms and machine gun conversion devices with Lawson. On one occasion, Brown indicated to Lawson the individuals in Oakland who Brown was supplying firearms to were “scar[]y.” Lawson, Phillips, Gordley, Warren Jr., and Alexander are all prohibited from possessing firearms because they each have one or more prior felony convictions.

The investigation began when a firearm used in a shooting in Sacramento was traced to the last known sale by a federally licensed dealer in Georgia. A subsequent sale of the firearm led to Lawson’s firearms trafficking organization. Lawson and his co-conspirators used coded language to traffic firearms and moved money using a variety of financial institutions. During the investigation, interdicted packages destined for Lawson and other co-conspirators were found to contain firearms, ammunition, knives, and brass knuckles, among other things.

This case is the product of an investigation by the Bureau of Alcohol, Tobacco, Firearms and Explosives, the U.S. Postal Inspection Service, and the Sacramento Region/San Francisco Bay Area Cross-Jurisdictional Firearms Trafficking Strike Force Initiative. Assistant U.S. Attorney Alexis Klein is prosecuting the case.

The Sacramento Region/San Francisco Bay Area Cross-Jurisdictional Firearms Trafficking Strike Force is one of five cross-jurisdictional strike forces launched by the U.S. Department of Justice in July 2021 to disrupt illegal firearms trafficking in key regions across the country. Each strike force is led by designated United States Attorneys, who collaborate with the Bureau of Alcohol, Tobacco, Firearms and Explosives (ATF) and with state and local law enforcement partners within their own jurisdiction as well as law enforcement partners in areas where illegally trafficked guns originate.  The strike forces use the latest data, evidence, and intelligence from crime scenes to identify patterns, leads, and potential suspects in violent gun crimes, and are an important part of the Department’s Comprehensive Violent Crime Reduction Strategy.

Williams pled guilty to unlawfully dealing in firearms without a license and is scheduled to be sentenced by U.S. District Judge Dale A. Drozd on Jan. 31, 2023. Williams faces a maximum statutory penalty of five years in prison for unlawful dealing in firearms. Charges are pending against the remaining defendants. The charges against them are only allegations; they are presumed innocent until and unless proven guilty beyond a reasonable doubt.

This effort is part of an Organized Crime Drug Enforcement Task Forces (OCDETF) operation. OCDETF identifies, disrupts, and dismantles the highest-level criminal organizations that threaten the United States using a prosecutor-led, intelligence-driven, multi-agency approach. Additional information about the OCDETF Program can be found at www.justice.gov/OCDETF.

This case is part of Project Safe Neighborhoods (PSN), a program bringing together all levels of law enforcement and the communities they serve to reduce violent crime and gun violence, and to make our neighborhoods safer for everyone. On May 26, 2021, the U.S. Department of Justice launched a violent crime reduction strategy strengthening PSN based on these core principles: fostering trust and legitimacy in our communities, supporting community-based organizations that help prevent violence from occurring in the first place, setting focused and strategic enforcement priorities, and measuring the results.