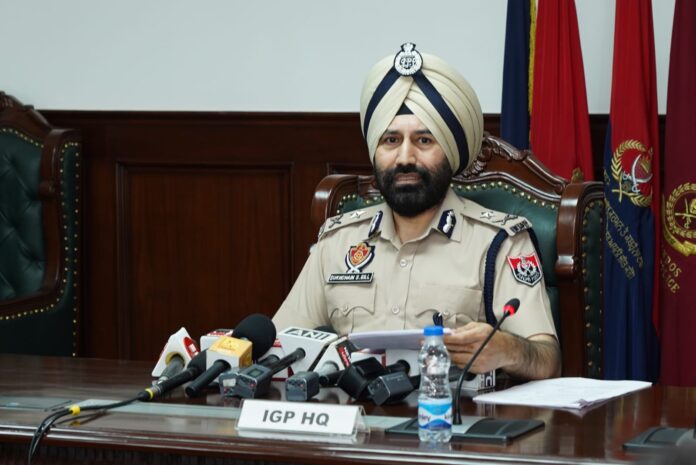 CHANDIGARH : With the decisive war against drugs waged on the directions of Chief Minister Punjab Bhagwant Mann to root out drugs completes three months, Punjab Police have arrested as many as 5824 drug smugglers including 916 big fish since July 5, 2022. The Police have registered a total of 4444 first information reports (FIRs) of which 461 are related to commercial quantity.

Inspector General of Police (IGP) Headquarters Sukhchain Singh Gill, who was addressing his weekly Press Conference here on Tuesday said that the Police teams have managed to recover 203Kg Heroin from across the state after carrying out cordon and search operations in drug-affected areas besides laying nakas at vulnerable routes across the state. Additionally, 147.5Kg heroin was recovered by the teams of Punjab Police from Seaports of Gujarat and Maharashtra, taking the total effective recovery of heroin to 350.5Kgs in just three months, he said.

He said that with 19 more Proclaimed Offenders (POs)/Absconders in NDPS cases arrested this week, the total number of arrests reached 342 since the special drive to arrest POs/absconders was started on July 5, 2022.

Meanwhile, on the direction of Chief Minister Punjab Bhagwant Mann to make Punjab a drug-free state, extensive anti-drug drives have been launched by the Punjab Police to combat the menace of drugs from the border State. The DGP has also strictly ordered all the CPs/SSPs to identify all hotspots where drugs are prevalent and all top drug smugglers in their jurisdictions. He also directed the Police chiefs to effectively forfeit the property of all the arrested drug smugglers so that their ill-gotten money could be recovered.