CHANDIGARH, August 19 : In what will certainly prove an indefensible embarrassment for the Aam Aadmi Party and its two Chief Ministers, Arvind Kejriwal and Bhagwant Mann, Chairman All India Kisan Congress and Bholath MLA today exposed their fake claim that New York Times had done a “front page” story on Delhi Education model. 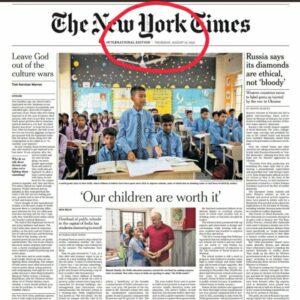 Khaira circulated the original front page copies of the New York Times along with the “photoshoped” copies circulated by Kejriwal and Mann on various social media platforms.

“It is shocking and shameful that an elected Chief Minister like Kejriwal should go on record saying that the New York Times had done a story on Delhi education model on its front page, which it never did”, Khaira said, wondering why a Chief Minister needs to do that.

Without commenting on the CBI raids on Delhi Deputy Chief Minister Manish Sisodia’s house in connection with alleged bungling in Delhi Liquor policy, which has now been withdrawn after Delhi Lieutenant Governor recommended a CBI probe, Khaira said, while courts will establish the truth, but just because a foreign newspaper had done a story, which actually it had not done the way Kejriwal and Mann claimed, does not prove his innocence. “The New York Times or for that matter no newspaper issues character certificates for anyone”, he remarked.

The firebrand Congress leader said the US paper had done a story on the Delhi education model on inside pages a few days ago. “Apparently to play it big, Kejriwal and his team went around claiming it to be the front page news story which it was not and without realizing that many more people also do read US newspapers and who have exposed their lie”, he said.

Khaira observed that making such a false claim knowingly and that too by the Chief Ministers reveals as to what extent they can stoop in circulating lies. “You have every right to defend your Deputy Chief Minister against the CBI raids, but why try to defend him by speaking lies?” he asked, while remarking, “you are only exposing yourself and weakening your case, which otherwise also is weak as you have already withdrawn the policy after LG recommended the CBI probe”.

The Congress leader said the NYT had done a story on inside pages in its August 17 issue, while the AAP circulated photoshopped copies of August 18, showing it on the front page.